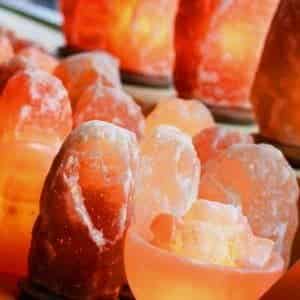 Himalayan salt lamps are beautiful to look at but how do they work and are they good for your health?

Here’s how salt lamps clean the air, if they release negatively charged ions, beneficial effects and the one I own and why.

Plus how to use them properly and where to place them in a room for best results.

What is a Salt Lamp?

Himalayan rock salt lamps are hand-chiseled blocks of ancient crystal salts, like this beautifully carved tower I have on my desk now, from the Khewra salt mine in Pakistan.

They usually have a soft pink color, often pinkish-orange, due to the high concentration of trace minerals like iron contained within the crystalline salts.

Inside the hollowed out middle of the lamp is a light bulb to generate both light and heat. This is important as a salt lamp won’t work properly without a heat-producing light.

They also come in baskets and bowls of glowing  salt blocks, like this pretty ‘firebowl’ design, that radiate with a gentle amber-pink glow in any room you place them in.

In fact, due to their popularity in recent years, an amazing variety of designs are now available.

Most people find Himalayan rock salt lamps attractive and soothing to look at, but how do they work, what are their potential benefits and can they produce beneficial negative ions?

Water vapor is always circulating in the air of any room of your home. These airborne water droplets carry along with them allergens like dust, pollen, pet dander, mold spores, smoke particles, and even bacteria and viruses.

Salt is hygroscopic, meaning it attracts water molecules from the surrounding air. A large block of pure salt, like a Himalayan lamp, is especially attractive to water vapor and its attached pollutants.

Once attracted to the lamp’s surface, these microscopic allergens remain trapped on it and not floating in the air where you could previously breathe them into your lungs.

As a salt lamp slowly becomes saturated with moisture it attracts from the air around it, the heat from the light bulb inside dries it, thus continuing the hygroscopic effect for as long as the light is on.

Occasionally, perhaps every few weeks, it’s good to turn off your lamp for an hour, let it cool and then gently rub it with a damp cloth to clean away trapped dust and pollution.

The rest of the time just leave it on and let it purify the air in your home of allergens naturally.

Do They Really Generate Negative Ions?

Can rock salt lamps really work to produce beneficial negative ions? This is a question many people have when buying one. The answer is yes, but not a great deal of them.

Testing has shown low levels of negative ion generation. This is theorized as primarily from the moisture evaporating on the heated salt.

Some authorities maintain that the photoelectric effect, where light frees electrons from the surface of a solid like salt, plays a larger role in ion production though.

As a negative ion generator though, these lamps have a limited range and very small output and aren’t considered nearly as effective as a true negative ionizer like this. 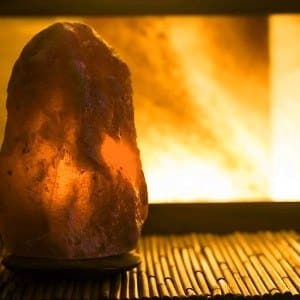 Some point to the cumulative result of keeping a salt lamp on at all times and how this can slowly generate more and more ions and improve the air quality over time.

One reported test showed significantly more negative ions after a few days of having the lamp on in the room tested versus the initial test.

This may well be the case, and pink salt rock lamps are certainly a beautiful addition to any room. Practically though, their negative ion producing range is quite limited.

Don’t expect a small salt light to flood a large room with negative ions. Even extremely large ones like this, while visually stunning, will only produce a small amount of negatively charged ions in the air around them.

Instead, it’s best to consider any ions from salt lights as a small extra positive and position them with their short ionizing range in mind.

It’s difficult to back up these claims with double blind scientific studies, though there is of course little incentive for this expensive research to be done in the first place.

There are, however, two other less well known reasons that proponents suggest may explain why so many people feel better using one of these lamps in their home.

Constant heavy exposure has been shown to increase cortisol levels, which leads to tiredness, higher stress, reduced ability to concentrate and lower immunity. It can also negatively affect your circadian system, making it difficult to get to sleep at night.

You can feel this effect particularly in open offices with a lot of electrical equipment. Try working near a strong electromagnetic generator like a printer and you’ll know how quickly it wears you out.

Proponents for Himalayan salt lamps say they help protect you against electromagnetic radiation. Though realistically, just one lamp would have trouble counteracting a room full of electronic equipment.

The closer a salt light is to you the better job it will do at reducing the negative effects of this kind of radiation. It’s still better to keep as far back from screens and other electromagnetic emitting equipment as possible though.

Color therapy may not sound particularly scientific but many people report great results with it, include higher energy levels, reduced anxiety, a more positive mood and a clearer mental state.

Humans certainly respond well to beautiful colors and the soothing pinkish-orange glow of these natural lamps can be helpful for stress relief.

Another positive benefit of pink crystal lamps is that they don’t emit blue light. Most artificial light is high in the blue spectrum which has been shown to reduce melatonin production and can interfere with normal sleeping patterns.

The soft amber and pink glow of a Himalayan lamp is the ideal lighting to relax before bed. Doing so for a while before you go to your bedroom may even help you get to sleep.

Where to Place Crystal Salt Lights for Best Results

The recommended position for a pink salt lamp is quite close to where you spend a lot of time so you can breathe in the fresher air it generates directly.

The hygroscopic air purifying effect is not dependent on negative ions and is the basic science of water vapor attraction and evaporation. 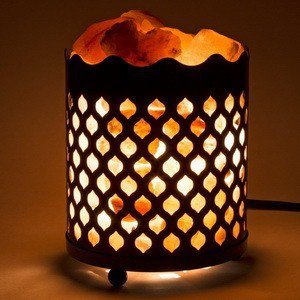 By a coffee table next to the seat where you watch TV is a great place, as is your office desk at home, or even at the office if you feel like you can have a salt rock lamp there.

Not only will it help purify the air and expose you to at least some negative ions, it may also help counteract electromagnetic radiation and provides a gentle, soothing amber-pink glow.

Most people who own Himalayan crystal lamps report that they find them very relaxing to be near. A high percentage also attribute positive properties to them.

If salt lamps are a hoax, they’re certainly a very popular one. After many hours of reading scientific research, articles, forums and comments about these lamps, I’ve found the vast majority of those who use them express various kinds of health effects.

They are limited in their negative ion generation, especially compared to a true corona discharge ionizer like this recently released and exceptionally powerful new design.

Despite this, it does seem that the majority of those calling Himalayan salt lamps a hoax also say they’ve never owned one. Perhaps they should give them a try. They might change their mind.

The One I Own and Why

The Himalayan salt crystal lamp I have on my desk is this stunning and guaranteed authentic tower lamp.

I’ve seen much more expensive ones but I really like the shape, size and particularly the rich and glowing colors of this brand.

It would also be fine in a bedroom, if you like gentle pink and amber lighting before sleeping, or in a lounge room or living room. It’s recommended to have it quite close to where you sit for the most benefits.

While they are not anywhere near as powerful as an ionic air purifier, natural salt rock lamps do clean the air and are a beautiful addition to any living space.

If you found this page useful please share it so more people can learn how Himalayan salt lamps work, their beneficial air cleaning effects and where to position them for best results.

Pin
Share
Tweet
This article may contain affiliate links to products I've researched and recommend. As an Amazon Associate I may earn from qualifying purchases at no cost to the consumer.