Air pollution can be particularly high inside your vehicle while you’re driving.

With exhaust fumes from the road and other pollutants, like toxic off-gassing from vehicle interiors, your car is not the healthiest place to be breathing in.

If you live in the country and can travel with your window down you’re unlikely to have problems.

Driving around in the city for long periods though can lead to tiredness, a sore throat and headaches. This fatigue can even become so bad it could lead to dangerous lapses of concentration.

Here are 8 vehicle air filters and auto ionizers to improve the air you breathe while driving.

Plugging directly into your vehicle’s 12-volt power supply, this bestselling air cleaner for your car takes up virtually no space. There’s just the crystal blue top, where the ions are generated, popping out of the cigarette lighter.

There are quite a few models that look similar to this design, but the FRiEQ specifically lists negative ion generation of 4,800,000 pcs/cm3. That’s quite an impressive amount for such a small automotive air cleaner.

One concern with these type of plug-in car ionizers is that they can produce small amounts of ozone as well. This can help with air cleaning and allergen removal, but if the faint bleech/office equipment smell of ozone ever becomes noticeable in your vehicle it would be best to unplug this ionizer for a while.

The manufacturer says their product produces only a ‘safe amount of ozone’, which in the USA is less than 0.05 ppm, and I have seen an identical looking design list under 0.05 ppm in their specifications. Still, this is something that really should be displayed up front.

For a highly compact car air freshener and ionizer at a very low price, the FRiEQ air purifier fits the bill. Once you plug it in to a standard 12v car adapter it will continue to generate considerable negative ions for as long as your car is running.

Another model similar to the FRiEQ is the is the Twinkle Birds 12v car adapter ionizer with 3 color options. It also has 2 USB charging points, allowing this auto air cleaner to double as a phone charger. They even include a free USB cable.

The Twinkle Birds car and truck ionizer produces 5.6 million negative ions per cm³ and does list ozone as less than the safe .05 parts per million. The description also offers a 30-day money-back guarantee and 12 month warranty for quality issues.

This newer car plug-in air purifier doesn’t have anywhere near as many reviews as the FRiEQ, but I’d recommend checking the price and comparing it here on Amazon to see if this would be the best auto purifier ionizer for you.

HEPA filter based air cleaners for your home are popular and highly effective but it’s rare to find a good one for your car given the size and space restrictions when driving.

The MILI portable HEPA air purifier for cars available here at Amazon is probably the best looking model in this review with its sleek aluminium build and metallic colors.

It fits easily in standard cup holders and is powered by both the 12v car adapter and included USB cable for modern vehicles.

There are some great features, but also a few considerations to be aware of before buying this car air purifier and ionizer. Let’s have a look at the pros and cons of this new portable HEPA air cleaner.

If you are looking for a HEPA filter based air purifier for your car with the added benefit of negative ions, the MILI auto air cleaner and ionizer deserves serious consideration. It’s slim and light and since it can be powered by USB it could also be used on your work desk. 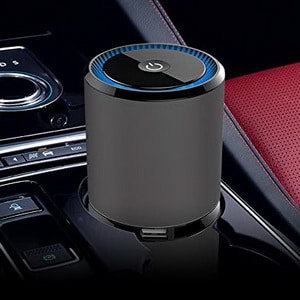 The inexpensive Thinkga car purifier ionizer is another auto air cleaner that uses negative ions to purify the air inside your car.

With a sleek aluminium body and dual USB ports for charging, this car ionizer produces 5 million anions (negative ions) and will clean the air within 10 cubic meters, more than enough for the inside of your car.

The manufacturers say that this unit will remove 99% of harmful particulate matter (PM 2.5) and is effective against cigarette smoke, exhaust fumes, bacteria on the steering wheel, harmful benzene from car seats and many other odors and allergens.

They also state that the Thinkga ionizer is tested safe for use in your car, home, or office and maintains extremely low levels of ozone.

It is tested below .005 ppm within 24 hours, which is much lower than the legal safety standard of .05 ppm regulated by the EPA.

The Thinkga car air purifier is surprisingly good value on Amazon and comes with both a car adapter and AC power plug. Given this, you could easily use it as a portable air cleaner as well. 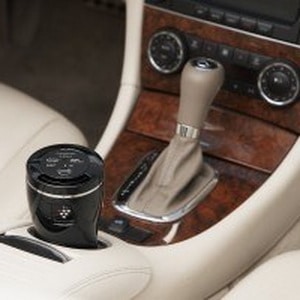 The air inside your car can be one of the most polluted environments you spend time in.

Sweat and odors get trapped in the upholstery. while the dashboard and fabric itself off-gas with a variety of potentially hazardous chemicals and volatile organic compounds.

Add to this all of the carbon monoxide and other pollution from the road and it’s not surprising how often we feel drained after driving for any length of time.

The Sharp IG-EC15 High Density Ion Generator uses Plasmacluster technology to clean and refresh the air inside your car and leave it smelling more like somewhere you want to spend time in.

Simple to operate, it has both low and high speeds, is very quite at only 28 decibels in silent mode and has a long life ion generating engine, said to last up to 19,000 hours without any decrease in performance.

The Plasmacluster ion generator fits into your car’s cup holder and is a powerful way to reduce tiring pollution when you’re driving long distances and keep your car smelling fresh.

As well as plugging into a cigarette lighter, and unlike most other car ionizers I’ve seen, it can also be powered by an included USB connection if you have a modern car that has a USB port.

Given this, the Winext could be considered not just an air purifier for your car, but also a portable ion generator for your office desk or to use in hotels when traveling.

To connect the ionizer by USB requires 5 volts, which means it should be compatible with both older USB 1.x and 2.0, which are listed as providing a 5 volt power supply, and in USB 3.0 which is higher.

While quite slim, the Winext auto air purifier is about 5 inches wide and freestanding. That’s fine for portability but keep it in mind when considering whether it would be a good fit for your car.

While the negative ion output of this car ionizer is similar to the previous model reviewed, its ability to circulate air through the electrostatic filter should make it a bit more effective at air cleaning in general.

You can see more details, pictures and reviews and check the price here on Amazon for this portable auto air purifier. 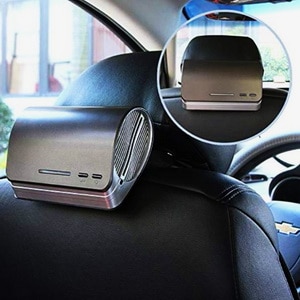 The multi-functional Zendora air purifier for cars is packed full of a surprising number of air cleaning technologies.

It has a HEPA filter to trap airborne particles as small as 0.3 microns, like dust, pollen, pet dander and mold spores, and with a 99% efficiency rate.

An activated carbon filter to absorb gas based odors and pollutants, such as cigarette smoke, gasoline fumes and volatile organic compounds.

A combination photocatalyst filter and UV lamp to kill germs and break down toxic VOCs, like ammonia and formaldehyde from car seat upholstery.

A negative ion emitter that produces 4,000,000 anions per second to further clear the air of airborne allergens and contaminants.

And to top it all off, an aromatherapy diffuser if you want to use essential oil to spread fragrances in your car.

The design of the Zendora combination purifier is unlike any other car air cleaner I’ve reviewed before and it’s good to see manufacturers innovating with models like this.

If all of its different filters and air cleaning technologies work well together it should be highly effective at eliminating floating particles and contaminants in your car.

It appears to be new in 2019 so is somewhat unproven but the reviews are currently overwhelmingly positive and the price is so low it’s not much of a risk to give it a try and see how it works for you.

If you spend a lot of time driving and value having the best quality air to breathe in your car, truck or RV then this new portable purifier, sanitizer and allergen destroyer is an effective option.

Photocatalytic oxidation is also effective against pet dander, making this model a good choice if you travel with pets in your car but don’t want to use a HEPA filter based air cleaner that can need regular replacement around cats and dogs.

This air cleaner for your car does produce negative ions as well, though at 500000/cm3 they would be considered a secondary addition to the photocatalytic oxidation air filtering.

There are 3 fan speeds with 3 ion output settings and the manufacturer guarantees a safe ozone output of less than .04 ppm at the highest ion setting, under the EPA recommended limit for ozone.

The Air Angel mobile air purifier comes with a padded carrying case and removable mounting bracket for positioning it on the dashboard of your car or a similar surface. It can be powered by both a regular power corder and a standard 12v car adaptor, so potentially you could use it both at the office and when travelling in your vehicle.

While this air purifier and ionizer is higher in price than the other car ionizer reviewed above, it is the only product made in the USA and utilizes some quite unique technology. There’s a 1 year warranty, more details and many positive reviews here with the Air Angel mobile air purifier.

I hope this review of the best car air purifiers and auto ionizers has helped you find an effective way to clean the air you breathe inside your vehicle.

Please share it with friends who do a lot of driving as vehicle air pollution on long journeys can lead to tiredness and lapses in concentration.

A good air cleaner for your car or truck is a wise investment in your personal safety each day out on the roads.

Any cookies that may not be particularly necessary for the website to function and is used specifically to collect user personal data via analytics, ads, other embedded contents are termed as non-necessary cookies. It is mandatory to procure user consent prior to running these cookies on your website.